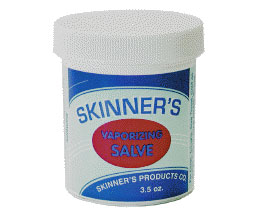 "My wife rubs Skinner's Salve on the bottoms of her feet when she has a cough. She says it works, I agree!"

Why do Muscles get sore?

To make muscles fitter, you damage them slightly during workouts, prompting the fibers to repair themselves and become stronger. This process "is a good thing," said Thomas Swensen, a professor of exercise and sports science at Ithaca College in New York. "You want to stress the muscles. They adapt positively." But in the meantime, they ache and, unfortunately, few methods reliably relieve the soreness.

The painkiller ibuprofen, for instance, has little effect on exercise-related pain, studies show, and may actually reduce the ability of muscles to repair themselves. Similarly, post-exercise ice baths chill muscles, as you would expect, but do not, most studies show, make them less tender.

On the other hand, sports massage marginally reduces soreness, some studies suggest, although the overall effect is "too small to be clinically relevant," a systematic review of massage-related studies concluded in 2012.